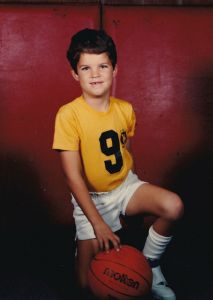 You’ve probably heard all about his fanatic love for the Cardinals.  The NFL became his most-loved sport to watch as he grew into an adult.  I think the fun and party atmosphere of tailgating probably added to that attraction. 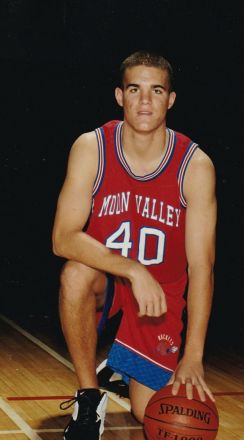 Because he was a great team player.

He was aggressive and competitive.

He always wanted to play his best and he wanted his whole team to play their best so they could win.

He was consistently good so he was always a favorite of the coaches.  They could count on him to play a good game – every game.

He played baseball and basketball when he was younger but chose to focus on basketball when he got into Junior High School.  He went to basketball camps all summer long, every summer.  When he wasn’t at camp, he was at the park playing a pick up game with his buddies and whoever else would show up.  He had the opportunity to be on the same team as Richard Jefferson in high school.  I think it was a great eye-opener for him because he got to play with someone who actually had the potential to be a NBA player.  It helped him put his thoughts of becoming a pro basketball player into a more real perspective.

Being a great team player also helped him be a great Police Officer.  He was competent and responsible.  You could depend on him to do his part plus more.

Loyalty was HUGE to him.  If you knew him, you knew this about him.  He wasn’t quiet about it.

He wasn’t quiet about anything that was important to him.

His personality was an unusual blend of loving to have fun but needing to follow the rules.  And he added fun and energy to whatever he did.  He had a very quick wit – amazingly clever quips would come out of his mouth at just the right time to bring a big laugh from everyone around him.

I am proud of the David Glasser Foundation as it begins to move forward, giving back to the Phoenix community which has been so great in their support of us and our Blue Family.

The foundation is also planning to honor Davey’s love of sports by developing sports camps and leagues in high risk areas of Phoenix with police officers as some of the coaches in order to help grow and develop healthy relationships.

Davey would have love that!

3 responses to “He Loved Playing Basketball”