And then I received the call that my son, David Glasser, a Phoenix Police Officer, had been shot.  Before the night ended, he was gone.

I felt like the rug of my life was completely pulled out from under my feet.  Nothing was what it was before.  My husband and I lived a mile away from Davey and his family and Davey was my husband’s best friend so there was daily interactions and conversations.

But now Davey was gone.

The ‘rug’ includes all of the material and superficial stuff in my life – the things that seemed to matter a lot until we were hit with this tragedy.  When something horrible like this happens, none of that means anything anymore.  It’s all very trivial.

When the ‘rug’ is gone, it exposes what is under it.

What is really important?

What do I say and how do I act when my world is shaking and crumbling around me?  What kind of character have I developed?

The real question is – how solid is the foundation I’ve been building my life on? 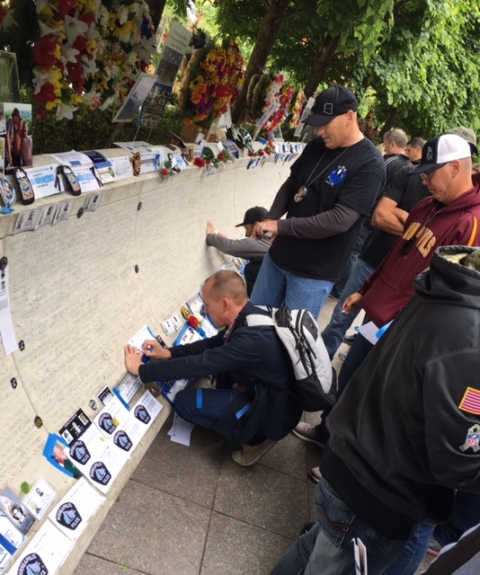 I have had to answer these questions.

The good news is that my foundation held.  It didn’t crack – it never even shook.

My life is built on a relationship with my Father God who was and is and will always be.  He never leaves my side and he gives me motivation to get up every morning.

God has won the war that is being waged here on earth.  It is finished.

But I still have a purpose to complete – a piece of his plan to accomplish.  And then he will take me home – where Davey is.

He had the Heart of a Warrior and –

his heart is still beating.

My son, David Glasser, was a Phoenix Police Officer who was killed in the line of duty on May 18, 2016.  He was also an organ donor.

Davey was only 34 years-old and in excellent physical condition when he was killed by a shot to his head.   As a result, a whole crowd of people who are still walking on this earth received his life-giving organs.

And someone got the Heart of a Warrior.

This heart beats for justice.

It beats for integrity and honor.

It beats for courage and personal sacrifice.

And it beats strongly for loving God and loving each other.

I believe that each of us has our own Warrior’s Heart.  God gave us things we are passionate about – things that make our hearts beat faster.  We’re all different so these passions are different as well.

The issues that we really care about are the areas where we are supposed to stand up and do something helpful, something positive.

How do I make a difference in this world?

How do you make a difference?

One very easy way we can make a difference is sign up to be an organ donor like Davey.  I’ve done that.  Have you?

Other ways to make a difference aren’t as easy but we need to figure out how to use our passions and our energy to have a positive effect on our world.  Don’t just talk about it – do it.  What do you get riled up about?  What angers you?  What frustrates you?  That is where your passion lies.

One of the failures in our current culture is too many people are spending their precious time and resources standing against and protesting against things.

But what are they standing for?

Their time and resources could be used to help people – to make a positive difference.

I choose to help grow the light at the end of the tunnel.  I choose to stand for what is right and honorable.  I stand for justice and freedom in our country by standing for the Thin Blue Line between the evil and innocent.

My Warrior’s Heart beats for loving God and loving others.

What does your Warrior’s Heart beat for?

What are you doing about it?

My son, David Glasser, was a Phoenix Police Officer who was killed in the line of duty on May 19, 2016.

These last 6 months have been the most difficult and painful months of my life.

One of the ways God has comforted me is through this truth – ” A person’s days are determined; you have decreed the number of his months and have set limits he cannot exceed.” Job 14:5.

God has already decided which day will be the last day of my life here on earth – and your’s.

Knowing this helped me let go of my mother when she passed away 12 years ago.  We had a very close relationship and she was my role-model for how a Christian woman lives her life faithful to God – all the way to her last breath here on earth.  I realized, if God wanted her in heaven with him, then that’s what I wanted for her.  She was an awesome grandmother to my children and had a special place in her heart for Davey.

Ten years ago I found myself in ICU with twelve blood clots in my lungs – a life-threatening situation.  God told me clearly that I wasn’t going to die then and I didn’t – even though 5 doctors told me the blood clots should have killed me. 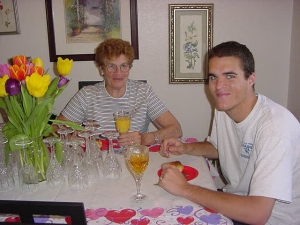 It just wasn’t my day.

I know that God has reasons for picking May 19 as Davey’s final day here on earth. I may never understand those reasons but I trust God.  And, since God wants him in heaven, that’s what I want for him.

It was decided.  There is no ‘wishing’ something else had happened.  God decreed the number of Davey’s days here on earth and then he took Davey home.

Now, standing on a foundation of God’s love and strength and grace, the rest of us are left on the earth to figure out how to move forward.  We need to figure out why we’re still here – what is God’s purpose for keeping us here?  And then we need to do it….until the day arrives that is already decided for us.

Meanwhile, through the tears, we focus on loving God and loving each other.

A bigger chunk of my heart is now in heaven with you, Abba Father.

He was there when Davey took his last call. 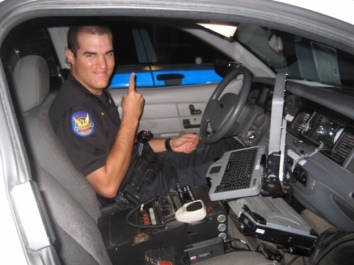 God was there when Davey stepped out of the police car and a bullet ripped off the back of his head.

This just can’t be happening.

He was there when responding bullets eliminated the evil that was standing on the driveway.

So no one else was hurt.

He was there while Davey’s squad members protected and cared for Davey as his blood spilled out onto the pavement.

The well-trained officers responded quickly even as their hearts were breaking.

God was there when the police and firemen revived Davey’s body and took him to the hospital.

They did everything they could…. and more.

It haunts my dreams.

He was there beside each of us as we each made our way to the hospital through a sudden, dark fog.

It can’t be true.

God heard my terrified cries followed by urgent prayers for a miracle as the news and the night unfolded.

He heard and he cared.

He provided family, friends, our Blue family, doctors, nurses, and a chaplain to help all of us hold together as we entered hell.

It felt like a journey into hell but I know hell is worse because God is not there.

He heard and he cared.

He wrapped his arms around us as the long night dragged on and Davey’s brainwaves gradually………disappeared.

This can’t be true.

The night finally ended and the sun rose once again.

I was still alive.

The rest of us were still alive.

Together, we were going to have to figure out how to go on without Davey.

It’s impossible to go on without Davey.

But what felt impossible on that day, God has made possible.  He has been there through everything, loving us and giving us strength.  He has heard every prayer and He has held us each time we have cried.

And He has given us a purpose for going on.

And He is here – making the impossible possible.

Pushing the Darkness Away

He Makes All the Difference