Today is the day!

Man Christmas is traditionally the first day of professional football.  I know football officially started earlier this week but David Glasser, my son who was a Phoenix Police officer who was killed in the line of duty in 2016, would be celebrating today.

He considered this to be the best day of the year for men who like football.  From their perspective, Christmas is good, football is better.  Of course, a lot of women like football, too, but I’m thinking that not very many of women would put football before Christmas.

Davey loved the Arizona Cardinals.   He was definitely not a fair weather fan – he was there, cheering them on year after year whether they were having a good year or not.  He had season tickets every year.  He knew all the stats and kept up with all the tweets.

Davey loved to tailgate before the games with all of his buddies.  There were lots of games of washers and corn hole.  Lots of food.  Lots of shots and beers.  It was a good time to blow off some steam with his friends since he was going into the 3-hour game where he didn’t drink any beer because the prices were too high.  Davey was always looking for the best deal.

If you sat next to Davey in a game, you were in for some extra entertainment.  He kept track of anybody sitting around him with the opposing team’s hat or shirt on.  He would regularly yell comments out to these fans of the other team as the game progressed – especially when the Cardinals were ahead.  They would also hear from him when they went out to get some food and when they got back with their food.  He and his buddies often had an extra ticket or two because someone from their pack couldn’t go.  They were very diligent in making sure that the people who were given those tickets would not be cheering for the opposing team.

I love this picture because it shows Davey’s pure delight in being at a game surrounded by Kristen and his friends.  It truly was one of his happy places. 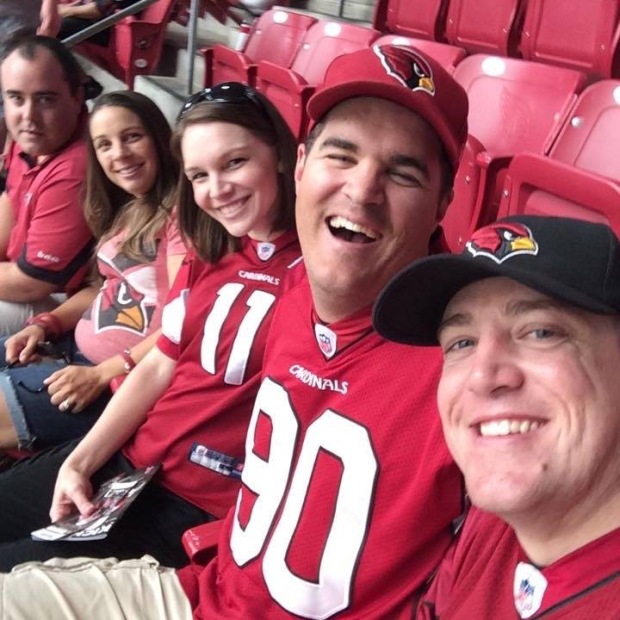 So we gather to watch the Cardinals game today – some of us in the stadium and some of us at home.

We remember our favorite Cardinals fan and celebrate his love for football.

It’s Not a Waste

I Want to Go Back