147 Police Officers were killed in the line of duty last year.

Multiply that number by the number of wives, children, moms, dads, sisters, brothers, friends, squad members and extended Blue Family members who cared about them.

86 law enforcement officers already killed this year and it’s only May.

Add up all these –

As I researched these numbers, I found that they fluctuate depending on who is counting and some deaths are evaluated as ‘in the line of duty’ significantly after the fact so the numbers for each year change.  The fact remains – there are a lot.

So many officers killed.

So many people affected.

The mountain of pain.

The fog of loss.

Waking up every day hoping it wasn’t true.

It took awhile for me to understand how many people were affected when my son, David Glasser, a Phoenix police officer was killed on May 18, 2016.

At first, I didn’t realize that the whole Blue family grieves when one of their brothers or sisters is killed.  But experiencing the huge waves of grief that were rolling over the ocean of over 5000 people at Davey’s funeral opened my eyes.  And the love and support that has continued to this day has shown me just how much the Blue Family cares for each other.  Thank you.

I also didn’t understand at first that there is a large part of the general public who grieves when an officer is killed in the line of duty.

There are a lot of people in our community who get it.

We tend to forget about this large group of people because they aren’t rioting in the streets.  They aren’t looting and shooting and screaming profanities. 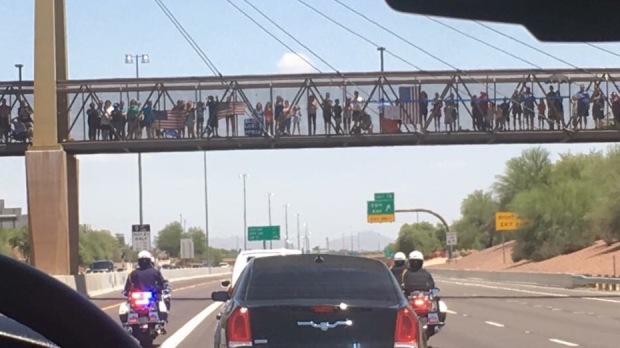 These people were lining the streets as Davey’s casket was escorted by our Blue Family from the church to the cemetery.  These were the people who were filling each overpass on the freeway, holding up flags and signs of love and encouragement.  People from this group were stopped all over the freeway and the sides of the freeway to show their respect for a fallen hero.

Some of these people were saluting as Davey’s limo went by – honoring Davey because they personally knew what it meant to put your life on the line for your country and community.

The bullets that were shot on May 18th, 2016 created waves out into our city and across the nation.  Another hero has fallen.