You would know that as well if you had seen him.

His body was hooked up to all kinds of machines that were keeping his lungs moving and his heart beating.

He was already with his Father God.

I am thankful to modern medicine which gave us time to start coming to terms to our new reality.  We had several hours to figure out how to start to say good-bye.  It helped.

I am thankful that the machines were able to keep his organs alive so that he could give the gift of life to so many other people.  Our families have been blessed by other organ donors so we know what an important thing this is.  Knowing that helped.

I am thankful for the doctors and nurses who treated Dave with care and respect.  They also were very helpful and understanding to those of us who spent the darkest hours of that night in rooms next to Dave in unbelief of what was happening.  It helped.

I am thankful for the rooms full of police officers and friends at the hospital who prayed for us and supported us through those awful hours.  It helped.

I am thankful for Dave’s squad who, disregarding their own pain, had the worst job of making telephone calls and getting us to the hospital.   I am also  thankful for the Employee Assistance Unit led by Sgt. Dave Osborne.   Both of these teams promised support and they meant it.  And it hasn’t stopped.  It really helped. 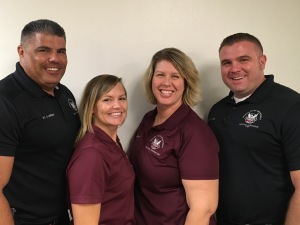 I am thankful for the entire Phoenix Police Department who supported us that night any way they possibly could.   They parked our cars so we could run right into the hospital, they brought food, they picked up family at the airport, they took care of the press, they drove us home, they never left their watch on Dave’s room and much more.  It all helped.

I am thankful for Pastor Mark Grochoki from our church, Palm Valley, who somehow found a way through the crowds and lines of police to pray for us in a small, dark corner of the hospital lobby.  It was an oasis of peace in a very long, terrible night.  It helped.

I am thankful for the Police Chaplain, Bob Fesmire, who is so clearly called by God to walk families like ours through the most painful hours of our lives. Your words of wisdom cut through the shock and helped us move forward.  You prayed for us through the night when we had no words.  I will never forget your prayer as we said our last goodbyes before leaving the hospital.  I don’t recall the exact words of your prayer but I remember God reaching out through them to wrap his arms around me to comfort me.  You were God with skin on that night, my brother.  You really helped.

May 19 is Dave’s official E.O.W.  But May 18th was his last day on earth.  Now he lives in our hearts and our memories until we see him again in heaven.

I’m not saying that we need to change the date on all the plaques and forms.