Finishing What He Started

Davey cared.  He didn’t just say ‘Love you’, he showed it and lived it.

He wanted our community to be a safe place for families to live and kids to play.

When he was 12 years-old he took a summer job as a junior counselor at a Boys and Girls Club in a high-risk area of Phoenix.  He wanted those kids to have a safe summer playing games and having lots of fun.

I will never forget – on his first day of being a counselor, one of the little kids vomited and Davey had to clean it up.  Yuck!  But it was an early lesson about how – when you care – you often find yourself in the middle of the yuck and mess of other’s lives and choices. 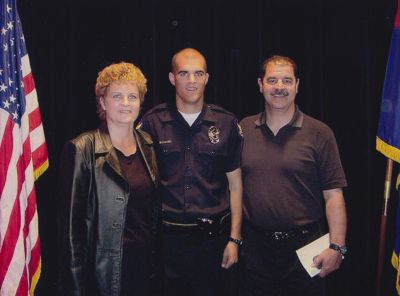 What a great lesson for a young man who would later choose to become part of the Thin Blue Line between the innocent and the evil.  He cared and he did something about it.  Everyday as a Police Officer, he stood for what is good and right in our world – pushing back the evil and often ending up in other people’s yuck.  He knew Police Officers weren’t perfect – he wasn’t perfect.  But they are willing to stand for what is safe and right.   They don’t just talk about it or throw some money at it – they are willing to put their lives on the line….because they care about making our communities safe.

Davey requested to work in high-risk areas of the city because the need for people who care is greater there.  The Thin Blue Line has to be stronger there.  He often told me that his goal was to put the people in our city who chose to put other lives in danger behind bars so they couldn’t hurt people anymore.  He received several commendations for his extra efforts against the monsters who beat up on babies and small children.

And he paid the highest price possible for his dedication to caring for our city when he was killed in the line of duty last year.

Davey made a significant contribution to our city when he was alive and he has inspired those of us who are left behind to make a difference through the David Glasser Foundation.  We are continuing the work that Davey started.

You have probably heard that Davey loved sports – all sports.  The disciplined activity of sports helped him grow into a strong and confident and capable adult.  So the David Glasser Foundation is planning to get volunteer Police Officers involved in developing sports clinics and leagues in the high-risk areas of our city to honor Davey’s love of sports and to share with other kids the positive benefits of sports.  This will also give the people in the community a chance to interact with Police Officers in a positive environment .

Davey’s life on earth has ended but his legacy of love is just starting to unfold.

Thank you for all of the support and love so many of you have already shown us.  Together, we are growing Davey’s legacy and continuing the battle.

2 responses to “Finishing What He Started”